Cartoons were always one of my favorite forms of entertainment, and even now I still enjoy watching a classic Bugs Bunny short or an episode from Rocky and Bullwinkle. Thanks to the likes of Warner Bros. and Walt Disney, animation had become a profitable arm of the motion picture business even before the advent of television, at which point Baby Boomers were introduced to literally hundreds of cartoon characters. But as popular as Fred Flintstone, Yogi Bear and Quick Draw McGraw were in the 1960’s, there were other animated figures that, despite not having their own shows, or even ever appearing in an eight minute animated feature, were just as familiar to us as any of the cartoon world’s biggest stars. Naturally, I’m referring to those characters who served as commercial spokespersons for many well-known consumer products. Tony the Tiger, Mr. Clean, Snap, Crackle, Pop and Speedy Alka Seltzer are just of few of the advertising icons who have graced TV screens for several decades.

In most cases, a product’s mascot is a friendly, non-threatening, one dimensional character, suggesting nothing in the way of a controversial back story. The Pillsbury Doughboy, Elsie the Borden’s Cow and the Lucky, the Lucky Charms Leprechaun, all seem rather harmless as they pursue their life’s work of pitching their particular products. But over the years in has come to my attention that a few non-benign individuals have slipped through the cracks, and have made their way to our television screens despite having obvious personality disorders. Not only were these disturbed figures allowed to appear in commercials to begin with, but shockingly, were allowed by the corporate suits to continue in their capacities for decades, long after their problems had been spotted by viewers and sponsors alike.  In any event, I’ll now produce a short list of a few animated product mascots with issues.

Sonny the Cuckoo Bird (Cocoa Puffs).   I’m sure most of you are familiar with Sonny, and are aware of his unfortunate condition. Introduced in 1962, Sonny, whenever placed in the proximity of Cocoa Puffs, the popular General Mills cereal, comes completely unglued, and begins his crazed rant, “I’m cuckoo for Cocoa Puffs, cuckoo for Cocoa Puffs,” all while practically bouncing off the walls. At least by shouting out his plight, those witnessing his temporary insanity are not stuck with having to guess what ails the poor bird. You’d think that once Sonny’s condition became clear, the last thing you’d want to put in front of him would be a box of Cocoa Puffs, but unfortunately Sonny, in the original commercials, was paired with Gramps, presumably Sonny’s grandfather. Gramps was really the main culprit, as during each segment, he’d find some excuse to temp his grandson with a bowl of you know what, thereby lighting the fuse that would result in still another outburst. The one thing that has never been made clear to me…since I never remember seeing Sonny actually eat any Cocoa Puffs, how do we know his outbreaks stem from liking the stuff? 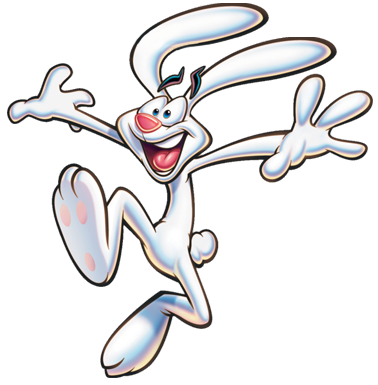 Tricks the Rabbit (Trix).   Another General Mills creation, Tricks , like his stable-mate, is totally obsessed with a particular brand of sugary cereal, but unlike Sonny, is able to keep is composure as he tries to move heaven and earth in order to get his paws on a bowl of fruit flavored Trix. Since 1959, the Trix Rabbit has donned a variety of disguises in a constant effort to fool a group of youngsters into sharing their box of Trix with him. For me, the question was always why didn’t Tricks take the money he spent on elaborate costumes and simply buy a box of his own? But to me, although I could see that Tricks had developed an unhealthy addiction to Trix, I never felt anything other than sympathy for the poor rabbit. But while I actually kind of liked Tricks, the same cannot be said for that selfish, unlikeable little snot-nosed kid that always busted the rabbit, denying him of even a mouthful.

In the early Trix television spots, Tricks would pose as a human authority figure, like a fireman or policeman, performing some sort of civic action that would compel a small circle of kids into offering him some of their Trix. The excitement of getting some of his favorite cereal would prove too much for Tricks, as his enthusiasm would cause part of his disguise to come off, enabling the children to recognize him as Tricks the Rabbit. At that point, one kid, apparently the spokesman for the group, would take the box of Trix away from the poor guy, admonishing him with the words, “Silly rabbit, Trix are for kids.”

Maybe the people at General Mills thought that boys and girls would identify with the boy who was saving his Trix from a being taken by a charlatan rabbit. Not me. I hated that kid! I’m sure most of us grew up knowing youngsters just like him…the ones that wouldn’t let you look at their baseball cards or borrow their comic books. If the makers of Trix really thought Baby Boomers were siding with the kid in those commercials, they certainly found out differently in 1976 when General Mills ran an election to determine whether the Trix Rabbit should be given a box of Trix (up to then, he never got as much as a mouthful in any of the previous ads).  Tricks was the overwhelming winner, and they actually aired a commercial showing that miserable kid handing over a box of Trix to Tricks. Yes, revenge really is a dish best served cold.

Charley the Tuna (StarKist Tuna). While the Trix Rabbit’s goal always seemed to be something in the way of self-gratification, the same certainly can’t be said for Charley the Tuna, who debuted in StarKist Tuna commercials in 1961. From the beginning, the running gag was that Charley, hoping to be chosen by StarKist, would put on an air of sophistication, thinking that they were interested in tuna with “good taste,” unaware that StarKist was really after tuna that “taste good.” Every effort by Charley would always end with him getting the same rejection slip, with the words, “Sorry Charley” attached to the end of a hook.

The big question, other than why a huge corporation would still be using such outdated fishing methods, is what is the deal with Charley? Does he know that being selected by StarKist means being chopped into 100 pieces before being stuffed into a can? If he’s in such a hurry to die, why not just offer himself up to some passing shark? Or is he mistaken over the nature of StarKist’s business…maybe he thinks they run a high-class aquarium somewhere, or a water-themed amusement park along the lines of Marine World? I wonder how Charley would feel if someone showed him a documentary about how the fishing industry really works? In any event, Charley should feel lucky that StarKist’s standards are as high as they are, and that they take the time to learn the names of fish they don’t want, and turn them down right there in the ocean, rather than at the factory when it would be too late to give them back their lives.

Punchy (Hawaiian Punch). No matter what one might think of Sonny, Tricks or Charley, at least they are not out to deliberately hurt anyone, which, of course, is the opposite of what we know about Punchy, the longtime mascot of Hawaiian Punch. We’ve all seen the TV commercials for Hawaiian Punch that features  the little guy wearing a straw hat, the first of which appeared in 1962. Punchy walks up to an unsuspecting man, probably a tourist, and offers him a “nice Hawaiian punch.” When the poor man replies, “sure,” Punchy proceeds to deck the guy with a vicious right-hand to the jaw. Haha…get it? Punch, as in a punch to the face, rather than the drink. This might be funny to a 3rd grader once, maybe twice, but the makers of Hawaiian Punch ran several variations of the same ad for many years, all with the same “punch-line,” if you will. I have wonder why a company that sells non-carbonated, overly sweetened soft-drinks would want their product associated with getting slugged, and who, in their right mind would find the character Punchy the least bit appealing?  I also wonder how many young impressionable children repeated Punchy’s joke on friends or siblings. I’ve been told that Punchy, whose ads no longer run on television, has toned down his behavior, as he now appears on Hawaiian Punch packaging as some sort of surfer dude, probably satisfied with the thought that he got away with slugging a man for decades, and emerged completely unpunished.

In preparing this article, I asked Mrs. Daley Planet if she knew of any examples of animated commercial characters with mental or emotional problems. She said no, but she had heard about an overly analytical middle-aged guy who takes simple, humorous television ads much too seriously…I’ll have to watch for him.

Trivia: In 1963, the makers of Post starting using a character called Linus the Lionhearted in TV ads promoting their newest cereal, Crispy Critters. Linus and his commercials were well received enough for Post to develop a half-hour cartoon show based on Linus, and other Post Cereal cartoon mascots. In the fall of 1964, “Linus the Lionhearted” was added to the CBS Saturday morning schedule, a 30 minute animated series featuring Linus, Sugar Bear (Sugar Crisp), Lovable Truly (Alpha Bits), So Hi (Rice Krinkles), and Rory Raccoon (Post Toasties). The “Linus” show lasted several years, but in 1969, the FCC ruled that children show characters could not be used to sell products on the same program they were starring in. Since that was the entire point of “Linus the Lionhearted,” the show was canceled.