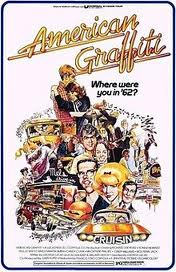 If you were ever searching for a candidate for the quintessential Baby Boomer “coming of age” movie, you couldn’t do better than “American Graffiti,” the Francis Ford Coppola produced teenage comedy that will soon celebrate its 40th birthday. Released in the summer of 1973, the impact of “American Graffiti” went well beyond the film’s immediate popularity, and success at the box office. Not only was it the motion picture that propelled George Lucas into the A-List of movie directors, advanced the careers of Richard Dreyfus, Harrison Ford, Cindy Williams and Suzanne Somers, reestablished child actor Ron Howard as a star, and placed legendary cult DJ Wolfman Jack into the mainstream, but also was responsible for igniting a 1950’s, early ‘60’s nostalgia craze, that led to TV shows like “Happy Days,” and “Laverne and Shirley.” But “American Graffiti did much more than make money and launch careers…it struck a cord with audiences, particularly those between the ages of 17 and 30, who proved more than willing to revisit a period that was only a decade earlier, but from which they felt eons removed from.

The origin of “American Graffiti” stemmed from young filmmaker George Lucas’s desire to pay homage to the teenage pastime known as cruising, especially how it was practiced in his hometown of Modesto in the early 1960’s. In addition to recreating the Friday night ritual, Lucas also wanted to incorporate the infatuation he and many others had with the mysterious radio personality Wolfman Jack, which ultimately led the picture to rely on classic rock and roll oldies rather than a typical music soundtrack. With the help of screenwriters Willard Huyck and Gloria Katz, a 15 page film treatment entitled “Another Quiet Night in Modesto” was completed in 1971, and pitched by Lucas to several motion picture studios, with no luck. Finally, Universal Pictures stepped in and agreed to finance and distribute “American Graffiti,” giving George Lucas a $600,000 budget, which was increased to $775,000 when Francis Ford Coppola signed on as producer. Filming began in June of 1972, and although it’s set in Modesto, Lucas felt his hometown had changed too much in 10 years, and did most of the location filming in Petaluma.

“American Graffiti” opens at Modesto’s Mel’s Drive-In, as four buddies, on the cusp of adulthood, assemble in hopes of making the final summer night of 1962 a memorable one. Curt (Richard Dreyfus) and Steve (Ron Howard) are slated to fly off to a Northeastern college to next morning, but while Steve is eager to leave his “turkey town,” Curt is reluctant to part from his familiar surroundings. Terry “the Toad” (Charles Martin Smith) seems oblivious to his future, and is more concerned with shedding his image as the town dork. John Milner (Paul Le Mat) is actually already an adult, and one can easily sense his depression that now, even his younger friends are outgrowing him. Milner’s only real accomplishment is his reputation as the guy with the fastest car, and even that is in jeopardy, as he learns that some guy from the valley has arrived in town to take away his title. Soon, the four separate, and the film follows each of their evening’s exploits. Steve spends most of his night in constant battle with his girlfriend Laurie (Cindy Williams) as the two must come to grips with how Steve’s leaving will affect their relationship. Toad, emboldened by being given the use of Steve’s 1958 Impala, somehow manages to pick up the girl of his dreams, the lovely but ditzy Debbie (Candy Clark). Meanwhile, Milner ends up being tricked into driving around with the mouthy 12 year old Carol (Mackenzie Phillips), and spends the night trying to unload her, all while looking over his shoulder for his latest drag-race challenger, Bob Falfa (Harrison Ford).

But it’s Curt’s story that is the most compelling. Early on, he sees what he feels is a vision, in the form of a beautiful blonde in a T-Bird (Suzanne Somers), who seems to flirt with him at a stoplight. While hoping to catch up with her, Curt wanders aimlessly, as he confides with his former teacher, briefly hooks up with an ex-girlfriend, and finally falls in with a pack of hoods known as the “Pharaohs.” As the night wears on, Curt slowly starts to feel out of place, as some of his illusions are shattered, especially when he learns everybody’s favorite myth-like radio personality, “the Wolfman,” is just a guy who never made it out of local radio.

It’s easy to see why “American Graffiti” resonated so deeply with so many Baby Boomers. 1962 was the final year of innocence of a decade that was supposed to be known as the New Frontier. A year later came the JFK assassination, followed by the Vietnam War, social unrest, more assassinations, and finally, the revelations of the Watergate scandal. Although “American Graffiti” was set a mere 11 years before the film’s release, 1962 and 1973 seemed like night and day. Much of the film’s impact is hard to feel in 2013, as 1962 and the events that followed are now very distant memories, but I’m wondering… if today, someone made a period piece movie about 2002, would it have the same effect “American Graffiti” had 40 years ago? What do you think?

Notes: Strapped with a low budget, “American Graffiti” went on to earn over $200 million dollars, and allowed George Lucas to set aside seed money for next big project, which became “Star Wars” (1977). The “Wolfman’s” radio broadcast, which is featured throughout the movie, included 41 original recordings from the rock and roll era. The licensing rights cost the production $90,000, but since RCA demanded more than could be spared, Elvis is nowhere to be heard. As “American Graffiti” ends, an on-screen epilogue reveals the eventual fates of the four principle characters. Lucas was criticized for not including the females, but he felt that that would have made the epilogue too lengthy. Universal Studios was not happy with “American Graffiti” as the movie title, feeling it sounded like an artsy foreign film. Lucas was given over 60 alternative titles to choose from, but he stuck with his original. An early script had the blonde driven T-Bird motor completely through Mel’s Drive-In after closing hours, revealing both the car and the girl to be ghostly figures, but the budget would not allow for such a costly special effect, and the idea was abandoned.