As a lifelong fan of motion picture science fiction, I’ve never had a problem with suspending my disbelief in the impossible and supernatural, and have willingly allowed myself to accept all kinds of preposterous concepts in order to be entertained. Whether its monsters, vampires, time travel, turning invisible, moving faster than the speed of light, or any of the powers of Superman, I never let the existence of real science get in the way of a good story. But there is however, one phenomenon that I have come across constantly in my many years as a movie and TV viewer that has never ceased to insult my sometimes questionable intelligence…the idea that the majority aliens throughout and beyond our galaxy, whether they land on our planet, or are confronted billions of miles from Earth, speak English, usually better than I do. Although occasionally, the movie in question will offer a lame explanation for this situation, more often than not, English speaking spacemen do not seem particularly strange to native Earthling characters.

Don’t get me wrong…I am not critical of English being used in such films. Since the beginning of American cinema, Moses, Jesus, Cleopatra, Marco Polo, Napoleon and Hitler have all been depicted as English speakers. This, of course, is poetic license used to make it possible for filmgoers to follow the story, and understand the characters. Having Alexander the Great (Colin Farell) speak Aeolic Greek would have been laborious for the screenwriters, the actor and the audience. And I wasn’t too concerned during “Ben-Hur” (1959) when Judah Ben-Hur (Charlton Heston), Messala (Stephen Boyd), Quintus Arrius (Jack Hawkins) and Sheik Ildirim (Hugh Griffin) all conversed effortlessly despite being from different parts of the Ancient World. My problem is when Captain Kirk (William Shatner/Star Trek) and some space alien from a planet million light years away, meet for the first time, and immediately begin talking like they both shared the same college English professor.

Early examples of English speaking aliens are found in many of the movie serials that were popular in the 1930’s and ‘40’s. In the 13 chapter “Flash Gordon” (1936), adventurer Flash Gordon (Buster Crabbe) travels from Earth to the planet Mongo, ruled by the evil Ming the Merciless (Charles Middleton). Mongo is different from our planet in one respect: Earthlings speak in dozens of assorted languages, while on Mongo only one is used…English. Neither Flash or Ming seem to notice this peculiar occurrence, but maybe in the heat of battle, an oddity of this sort can be overlooked. Naturally, Flash Gordon is eventually successful in causing Ming to be overthrown, but unfortunately Ming returns in the sequel, “Flash Gordon’s Trip to Mars” (1938). Ming, this time, is working in concert with Azura, Queen of Mars, in a plot which they hope will result in their conquering Earth. As you might have guessed, English is spoken on Mars, as demonstrated in Chapter 7, when Mongo asks one of the Martian army officers if they were “successful in capturing the Earthman, Flash Gordon?” What was the Martian officer’s reply? “Yep.” After completing one more Flash Gordon serial, Buster Crabbe went on to star in “Buck Rogers” (1939), which takes place in the 25th Century., a time when the Earth is run by a ruthless dictator, Killer Kane (Anthony Warde). Hoping for assistance in ridding his planet of Kane, Buck goes to Saturn, where, of course, everyone speaks English. I don’t know, maybe they all learned it in anticipation of someday visiting Earth…or Mars…or Mongo.

At least the science fiction classic, “The Day the Earth Stood Still” (1951) had the decency to make an effort to account for the alien Klaatu’s( Michael Rennie) perfect command of the English language, which was apparent moments after he walked down the ramp of the spaceship that carried him to planet Earth. Not only does Klaatu make it clear that his knowledge of English is merely a result of his careful study of our culture, but he also teaches Earthling Helen Benson (Patricia Neal) a few words of his native tongue, although audiences never did learn exactly what “Klaatu barada nikto” actually meant. My only problem is that if Klaatu was really a true observer of America circa 1951, I’m guessing he would have demanded to meet Milton Berle or Howdy Doody rather than the President. 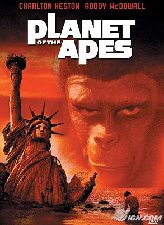 Even when there is a rational reason for English being used in places it shouldn’t, too often the characters in the film don’t seem to care one way or another. In “Planet of the Apes” (1968), astronaut George Taylor (Charlton Heston), finds himself on a planet run by clothes-wearing, gun-toting, speaking apes. Although those of us familiar with the movie know that Taylor was unknowingly back on Earth, Taylor didn’t know it, yet he showed not even an ounce of curiosity over the fact that all of the apes spoke English. Maybe he thought he had landed on Mars…or Mongo (ok, I won’t use that line again).

In 1977, NASA launched Voyager 1, an unmanned spacecraft designed to study the outer limits of the Solar System. In addition to transmitting information back to Earth, Voyager is equipped with a gold-plated audio-visual disc that will give basic information about our planet to any intelligent life form that might come across the craft anytime in the near or distant future. Among the many sounds found on the Voyager disc are of wind, ocean waves, baby crying and assorted wildlife, along with examples of Earth’s music, including the works of Bach, Mozart, and Chuck Berry’s “Johnny B. Goode”. There are also human greetings given in 55 different languages, under the remote chance that whoever finds Voyager does not speak English. Someone once imagined a scenario where Voyager 1 is discovered by a far off civilization, who return Voyager to us with a short note…”Send more Chuck Berry.”

Useless Trivia: In “The Adventures of Robin Hood” (1938), Robin (Errol Flynn) has a chance encounter with King Richard I (Ian Hunter), who has unexpectedly returned to England from the Crusades. Although Robin Hood and Richard “The Lion-Heart” converse effortlessly, this is historically inaccurate. Robin Hood was a Saxton while King Richard was a descendant of the Normans who conquered England in 1066… Richard I, who spent very little time in England during his 10 year reign as King, never bothered to learn English.